Showing posts from April, 2013
Show all

Thoreau as Runner: Some thoughts on "Life Without Principle"

Here is the last paragraph of Thoreau's "Life Without Principle." It's a little long -- Thoreau takes his sauntering seriously -- but worth the attention: Those things which now most engage the attention of men, as politics and the daily routine, are, it is true, vital functions of human society, but should be unconsciously performed, like the corresponding functions of the physical body. They are infra -human, a kind of vegetation. I sometimes awake to a half-consciousness of them going on about me, as a man may become conscious of some of the processes of digestion in a morbid state, and so have the dyspepsia, as it is called. It is as if a thinker submitted himself to be rasped by the great gizzard of creation. Politics is, as it were, the gizzard of society, full of grit and gravel, and the two political parties are its two opposite halves, — sometimes split into quarters, it may be, which grind on each other. Not only individuals, but states, have thus a confi
10 comments
Read more 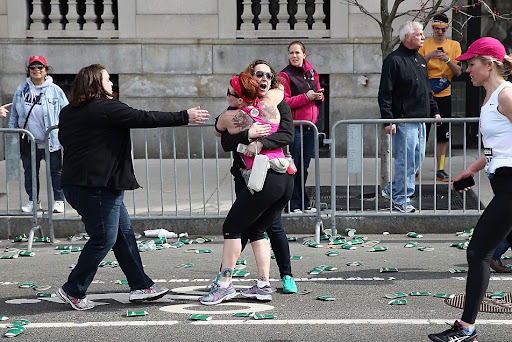 I want to talk about John Freeman today. On a horribly beautiful April morning, not unlike this Monday, the top runner and team captain of the cross-country team that I coached was hit by a train and killed. Running had saved his life before he lost it. As a ninth grader, like many, John had been struggling in school. The running helped him with his attention, and it gave him an identity at the school. By his senior year, he was one of the school's best athletes, an honor roll student, and had been accepted to a top university in the Northeast. He was going to try to walk-on the team. When I heard of the bombing at the Boston marathon, thoughts of John surged up from the deep places. The memories are too clear. His family invited me to the hospital to say goodbye before they stopped the respirator. I stood there with his mother and his father and thought of how the runner's heart in his chest continued to beat blood through his damaged brain. Running had made me a part of
2 comments
Read more

By Jeff Edmonds - April 15, 2013
Runners are more than familiar with pain. It's our bread and butter. We love to hurt. We believe in endurance, in suffering, in brutal and soul-withering work. But ours is not a violent sport. See, there's a difference between pain and violence. Violence violates. You see it so clearly in what happened today. The morning showed pain as triumph and pain as failure. The suffering carved out on the face of Dulce Felix (what a sweet name) as her legs no longer worked, as her glory faded into defeat, as the marathon gods smote her for believing too much, for wanting too much, was noble suffering. The suffering of loss, but sensible loss, human loss. This sort of loss was not a violation because all it risked was victory -- such a small thing in the grand scheme. Sweet happiness led the race, and then faded. Such is life. It requires endurance. With Jeptoo we saw strength overcoming pain. We saw her, after 24 miles of hard running, run harder. We saw the glory of a healthy body
28 comments
Read more
More posts