Showing posts from September, 2010
Show all

By Jeff Edmonds - September 24, 2010
I thought this was a nice article on education in America as well as on the way to approach problems in a democracy. One of the thing that bothers me most about the current political scene is its strange radicalism. You have middle class folks who are enmeshed in all of these various systems, none of which are perfect but all of which are at the very least functioning--some of them functioning quite well--and the most complex criticism that folks have is that the system must be absolutely broken and has to be radically reformed. This way of thinking leads to the two primary vices of our political discourse: ideological blindness and naive utopianism. It's behind the push from the right to undermine government as such, the attacks on taxation as such or any idea that smacks of social concern. It's behind radicalism on the left that boils all objections down to greed, racism or class conflict. These bankrupt forms of political discourse are grounded, uncannily, in t
5 comments
Read more 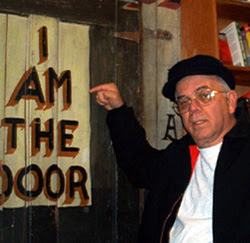 "That first feeling of something violent and resistless happening in the world at large, is accompanied by a hardly less primitive sense of something gently seething within me, a smouldering life which that alien energy blows upon me and causes to start into flame. If this be not the inmost texture of experience, I do not know what experience is." --George Santayana, "Belief in Substance" The American philosophers, folks like Emerson, James, Santayana, Dewey and their inheritors, took as one of their primary philosophical goals the articulation of the meaning of experience. They thought that much of modern philosophy thus far had been based on a false presumption, namely that there is a yawning metaphysical gap between the individual mind and the world that it perceives, and they thought that they could
6 comments
Read more

By Jeff Edmonds - September 05, 2010
People conceptualize conditioning in different ways. ... Some think it's a ladder straight up. Others see plateaus, blockages, ceilings. I see it as a geometric spiraling upward, with each spin of the circle taking you a different distance upward. Some spins may even take you downward , just gathering momentum for the next upswing. Sometimes you will work your fanny off and see very little gain, other times you will amaze yourself and not really know why. Training is training, it all seems to blend together after a while. What is going on inside is just a big puzzle... --Bruce Denton, from Once a Runner On the running message boards, training theories proliferate. Once you've read them for long enough, you begin to see that it's always the same sorts of questions: how best should I train? How should I combine my workouts? What kind of mileage should I be running? What's a tempo run? How fast should it be? How long should I taper? What about strides? Easy p
7 comments
Read more
More posts