Showing posts from September, 2011
Show all

Toughness as an Act of Imagination

"When watching for that distant clock to strike, our mind is so filled with its image that at every moment we think we hear the longed-for or dreaded sound. So of an awaited footstep. Every stir in the woods is for the hunter his game; for the fugitive his pursuers. Every bonnet in the street is momentarily taken by the lover to enshroud the head of his idol. The image in the mind is the attention; the preperception ... is half the perception of the looked-for thing."  --William James, Principles of Psychology When we talk about being mentally tough in running and racing, it is often unclear exactly what we mean. Most commonly we seem to imagine the tough individual as the one who can endure the most pain. Ascetic philosophers and religious figures through history have seen the encounter with pain as purifying in a certain way. Pain allows us to test the strength of our will by providing an obstacle to it, allowing us to distinguish the actions we choose from what has becom
11 comments
Read more 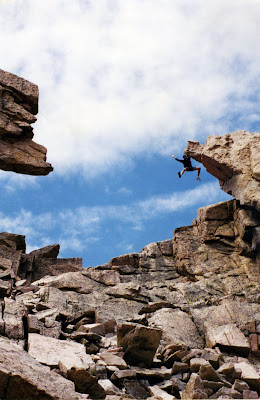 Andy in the Keyhole on Longs [Editor's note]: Andy broke this record again in August of 2012, taking an additional 4 minutes off the time. You can read his account of that run here . *  *  * At some level, it is possible to claim that every race is equally difficult. After all, every race is run to exhaustion. However, imagine that the effort you were about to undertake was an all-out run up and down the highest mountain in Rocky Mountain National Park. Not only that, the race would involve scrambling up 5.4 grade climbing with thousands of feet of direct exposure. Finally, the race would take approximately the same amount of time as a world-class marathon. Such an attempt might make you think that indeed some races are harder than others. At any rate, this was precisely the situation that Andy Anderson faced as he attempted to match Chris Reveley's 1979 Longs Peak round-trip speed record on August 23rd. Here's a thread from Fastest Known Time that gives the sta
6 comments
Read more

The passage  below is an excerpt from Paul Goodman's "Applied Science and Superstition," written in 1951. It is both quaint and prescient. He gets the problem quite right, but sixty years later, the scale of the problem has been incredibly transformed: In the century-old debate between Science and the Humanities, the humanities are now a weak opponent. They are not sure of what they are and they do not seem to have much of use to offer; whereas science looms in the fullness of success, it has made new advances in theory, and its technological applications have transformed the modern world. Yet sadly, perhaps just because our humanities are so weak, we have been losing the basic humane values of science itself. Having lost our firm credulity about what man 'is' and what society is 'for,' we have become confused about what is relevant, useful, or efficient. Thomas Huxley and Thorstein Veblen were thinking of a 'scientific society' where people were
4 comments
Read more 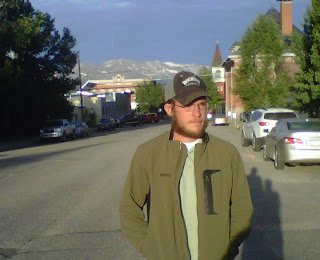 This interview is the fourth in  a series of exchanges  with local elite runners. These are the men and women who train hard, take their running seriously, and work to compete--and win--on a local and national level. For all of these folks, running is a hobby. None of them make a living doing it. They continue to represent the best of amateurism, the idea that excellence in athletic endeavor is valuable for many reasons beyond financial compensation. Most of these folks are friends that I have met during my time as a runner. They have offered me untold amounts of training advice, motivated me to get out the door, whipped my butt in races, and shared many a post-run beverage. Though this sort of runner is not famous at a national level, they are often locally known and help establish and maintain local standards of racing and training. John Ramsay's race times are very good, but they are not exceptional. He has met the benchmarks that separate out the top local runners from the re
3 comments
Read more 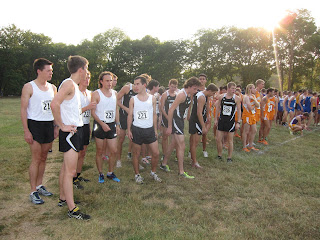 Ted, Justin, and I got together for a run sometime in mid-August. As we headed out, Ted tossed out the suggestion to form a team and run a series of local college cross-country races. Considering that I'd been running but not really training, I gave him some non-committal answer like, "Sounds cool, I'll think about it." We ran on. It was a brutally hot day, and we were all struggling a bit. None of us was in great shape, drained physically and psychologically by the Nashville summer. By the end of the run, I was just glad to be done, feeling totally flattened by an easy 6 miler. Afterwards, Ted asked again if I was up for racing. "Maybe," I said. Ted just sorta looked at me for a few moments, then he said this: "When your college coach told you there was a race coming up, did you tell him that 'maybe' you'd be ready? Hell no, you got on the line and raced." Put it on the line.  So, this was how I found myself two weeks la
9 comments
Read more
More posts