Showing posts from January, 2012
Show all

"Runners set!" The gun fired quicker than I thought it would, and the guys jumped out at the line. I was on the outside edge of the track, hip number 11. Perfect position, I realized, as we rounded the first curve. I stayed out, running free, steering clear of the spikes, feeling the fellows jostling behind me. Around we moved as a tight mass, settling quickly into a rhythm. As we entered the second lap, a runner moved around me on my right and forced me down into the rail. By the end of the fourth curve, we had ourselves more or less organized, just in time for the quarter split: 72.. 73... Perfect, I thought. I assumed we were right on 5-flat pace, since everything goes out a bit quicker then settles. I checked my breathing: good, even. The legs felt great. Everything was smooth. Next quarter: 2:27... 2:28... I had forgotten one thing since the last time I had been in this situation. Perhaps I can be forgiven because some of the kids I was running against were 5 yea
14 comments
Read more

Schiller was the only handsome philosopher. "We know that man is neither exclusively matter nor exclusively spirit. Accordingly, beauty, as the consummation of humanity, can be neither exclusively mere life, as has been asserted by sharp-sighted observers, who kept too close to the testimony of experience, and to which the taste of time would gladly degrade it; Nor can beauty be merely form, as has been judged by speculative sophists, who departed too far from experience, and by philosophic artists, who were led too much by the necessity of art explaining beauty; it is rather the common object of both impulses, that is, of the play instinct." --Schiller, "Letters Upon the Aesthetic Education of Man" "As in Puritan New England, grace was not blithely attained. A believer--a runner--earned it by losing toenails and training down to bone and muscle, just as the Puritans formed calluses on their knees from praying. No one made a cent from their strenuous effo
15 comments
Read more

"Men move between extremes. They conceive of themselves as gods, or feign a powerful and cunning god as an ally who bends the world to do their bidding and meet their wishes. Disillusioned, they disown the world that disappoints them; and hugging ideals to themselves as their possession, stand in haughty aloofness apart from the hard course of events that pays so little heed to our hopes and aspirations. But a mind that has opened itself to experience and that has ripened through its discipline knows its own littleness and impotencies; it knows that its wishes and acknowledgments are not final measures of the universe which in knowledge or in conduct, and hence are, in the end, transient. But it also knows that its juvenile assumption of power and achievement is not a dream to be wholly forgotten. It implies a unity with the universe that is to be preserved. This belief, and the effort of thought and struggle which it inspires, are also the doing of the universe, and they in some
10 comments
Read more 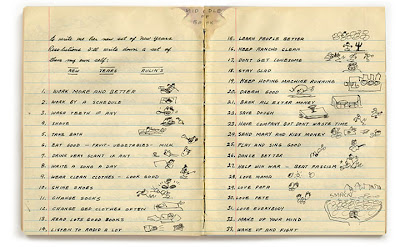 One of my goals for 2012 is to continue posting weekly on the blog. Of course, it's been three weeks since my last post and more than a week since the beginning of the new year. So, I've already failed. Now that I've gotten that resolution out of the way, I can go ahead and write a post. *  *  * The trend this year in discussing New Year's Resolutions is to downplay the role of willpower in the construction of resolve and to emphasize the more complex aspects of achievement. A few   articles (I could have chosen others) are representative of this trend. "The Fat Trap" by Tara Parker-Pope discusses the physiology behind the difficulty of losing weight, constructing the picture of weight-loss as a complex matter of personal history, epigenetics, hormones, and metabolism rather than a simple question of having the will to stick to a diet. "Be It Resolved" by science writer John Tierney looks more directly (and a bit more simply) at the actual e
7 comments
Read more
More posts