Showing posts from April, 2012
Show all

The Runner's Cycle of Suffering. And How to Break It.

Runners are an impatient lot. The determination to get faster can quickly turn into dissatisfaction with what we have already achieved. One of the virtues we all have to develop in order to reach our potential as runners is an ability to control this determination and keep it from turning us towards self-sabotage. I have seen in runners (myself being a prime example) a certain 10-step cycle of sabotage that is often repeated: 1) The runner who has been going through the motions decides to train harder and smarter and better. 2) Fitness and results follow fairly quickly, and the runner gets excited to be "in shape" and running well. 3) Out of this excitement, the runner sets an ambitious goal, usually hoping that his development will continue at the same rate that it has started with. 4) Motivated by both the excitement of being fit and the thrill of the ambitious goal, the runner begins to train even harder. 5) Now, training harder than he has ever trained, more ambit
10 comments
Read more

Don't Just Do It.

"Thinking men and artists have not infrequently described a sense of being not quite there, of not playing along, a feeling as if they were not themselves at all, but a kind of spectator. ... 'What does it really matter?' is a line that we like to associate with bourgeois callousness, but it is a line that is most likely to make an individual aware, without dread, of the insignificance of his existence. The inhuman part of it, the ability to keep one's distance as a spectator and to rise above things, is in the final analysis the human part, the very part resisted by ideologists." --Theodore Adorno, "After Auschwitz," Negative Dialectics It is common for intellectuals to wish that ordinary folks thought more about their lives and the consequences of their actions. It is even more common for ordinary folks to disparage intellectuals as being aloof or out of touch with reality. These positions mark extremes. As individuals, we ought to avoid these ex
8 comments
Read more The convention in track racing is to write out the distance of the event in meters, in order to distinguish a race run on the track from a race run on the road. It's not a 10k on the track, it's 10,000m. Obviously there is no need to be a stickler about this, and in fact the announcer at Sea Rays announced us as participants in the 10k and no one was confused or picky about it. Maybe it's just a matter of convention, but I think it also says something about the culture of track racing. The track oval is a space where distance is measured in meters and time in hundredths of seconds. It's the place you go to find things out. Everything is clearly marked; there's nowhere to hide. My buddy Ted and I had driven over here from Nashville, lured by the idea of a good night race under the lights with solid competition. Conditions were going to be pretty much perfect, 60 degrees and no wind. We got there early and watched the steeplechase, 800m heats, the mile. Large men hu
10 comments
Read more

Five thoughts on how training for 5k can help your marathon.

By Jeff Edmonds - April 10, 2012
It's marathon season, and many of you faithful readers are headed towards a marathon attempt after a long bout of marathon training. This is the perfect time to reflect on what you should do next, after that marathon is in the bag. Before gearing up for another long grind, I'd like to suggest spending a season working on your 5k time--and maybe even racing a bit on the track . The advice I give here is not based in physiology, and I don't even want to say what 5k racing and training means for every person. But I guess these are simple reasons I have come up with just from being a member of the running community for a while and also thinking about my own experience. 1) The primary reason that I suggest working on shorter distances first is simply that this is the most common path that the best runners take ; it's a tried and true path to success. There are people who have bucked this idea (some of them are my really good friends) and have run really well, but th
16 comments
Read more 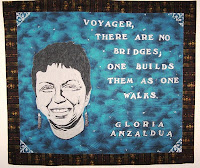 Anzaldúa was a chicana activist. “Why am I compelled to write?... Because the world I create in the writing compensates for what the real world does not give me. By writing I put order in the world, give it a handle so I can grasp it. I write because life does not appease my appetites and anger... To become more intimate with myself and you. To discover myself, to preserve myself, to make myself, to achieve self-autonomy. To dispell the myths that I am a mad prophet or a poor suffering soul. To convince myself that I am worthy and that what I have to say is not a pile of shit... Finally I write because I'm scared of writing, but I'm more scared of not writing.” --Gloria Anzaldúa  Many of the posts I have written lately have characterized running as a practice of self-care, almost as a type of therapy. I have written running as a quest to regain intimacy , as a form of coming to terms with the self , as a way of gaining confidence in the self, and as a way of escaping t
7 comments
Read more
More posts