Don't Just Do It.

"Thinking men and artists have not infrequently described a sense of being not quite there, of not playing along, a feeling as if they were not themselves at all, but a kind of spectator. ... 'What does it really matter?' is a line that we like to associate with bourgeois callousness, but it is a line that is most likely to make an individual aware, without dread, of the insignificance of his existence. The inhuman part of it, the ability to keep one's distance as a spectator and to rise above things, is in the final analysis the human part, the very part resisted by ideologists." --Theodore Adorno, "After Auschwitz," Negative Dialectics

These positions mark extremes. As individuals, we ought to avoid these extremes--we have to be careful not to become mere spectators of life, and on the other hand, we have to avoid the unreflective life. Thoughtful human experience is characterized by a gentle and controlled rhythm of reflection and action. Like positive and negative terminals on a battery, life sparks only when these moments are connected.

Our batteries are in danger of running out today. Folks seem always to be looking for more energy, whether it's in energy drinks, coffee, motivational sayings posted to social media, pharmaceutical anti-depressants. We try to cure this problem of lack of energy by reciting the Nike mantra, which is essentially the slogan for our manic age: "Just Do It." By just doing, we hope to escape the point of view of the spectator and plunge ourselves back into reality, lived and vibrant experience.

My sense is that this way of responding to flagging energy mistakes a symptom for the cure. The reason we are worn down is precisely because we are constantly "just doing" without thinking much about what or why or to what purpose we are doing. The answer to the problem of finding more energy may not be to do more, but to hesitate more, to think more.

Though culture presents it as a dichotomy, there is no tension between thought and action. Action requires thought as essential to it and part of it. Doing is mere impulse; it doesn't rise to the level of controlled action. When we take the point of view of "just doing," we disallow thoughts that might make us hesitate and reflect on whether all of this doing is sustainable, whether it's leading us in a healthy direction, whether it's harming ourselves or others. The "just do it" attitude is essentially reckless expenditure of energy without regard for the costs. It's the attitude of consumer capitalism--"Just Do It" translates pretty quickly into "Just Buy It." Nike has a financial interest in unreflective impulsion. Sure, it can get you out the door, but it's also what gets their shoes into your closet.

The guy I quote at the beginning of this post, Theo Adorno, was a big fan of philosophy. He thought it was the mode of human culture that is explicitly charged with preserving thought and critical reflection, the negative terminal of the battery of human action. Though Adorno can be difficult, his point in the above paragraph is pretty obvious: "After Auschwitz" we ought to be very suspicious of the call to live less reflectively, to just do without thinking. Auschwitz is a reminder of what humans are capable of when they cease to reflect on the consequences of their actions.

I generally dislike using the holocaust to motivate thought because first of all I think the impulse to "draw lessons" out of horrible experiences is one of the primary ways in which normalize and condition ourselves to living with evil. Secondly, and worse, it makes us think that evil was something that happened long ago, in another time, to another people, at the hands of others. There are plenty of examples of atrocity and evil today that should give us pause. Also, this is essentially a running blog, and let's face it the subject of evil is a drag, and you don't come here to get bummed out.

So, let me put the point I am trying to make in a different way. As a professional [and, at least on this blog, just a plain old] philosopher, I find myself often having to justify the practical importance of philosophy and its relevance to life. This is always a challenge to me because at a very basic level I find the practice of critical reflection the most practical asset in my life. Giving a justificatory account of thinking is like trying to justify breathing or singing or dancing. The very attitude that thinking is impractical just strikes me as odd from the outset.

Be that as it may, in a "Just Do It" culture, philosophy is in a position of having to justify its existence. This is of course difficult precisely because "justifying" is pretty much the opposite of "just doing." However, in my recent and fairly minimal work as a coach, the practical value of reflection has become pretty dang obvious to me, in a way that I think allows me to explain (even if this is a somewhat odious task) the value of philosophizing and reflecting more generally. So, instead of appealing to Auschwitz and saying something like: "Look what awful things can happen when people refuse to hesitate in the face of experience," essentially guilting you into remembering that philosophy is important, let me talk a little about coaching runners.

My primary function as a coach has not been to motivate my athletes. I always find that the extent to which athletes are motivated to become faster to be quite inspiring actually. The problem that athletes face, from high school through adulthood, is not how to find energy to train, but how to control the impulse to train so that it can work effectively. The challenge of training is a challenge of intelligence.

A coach shows you how to put motivation to work in effective ways. He helps you turn the impulsive thought: "I want to work to get faster" into an organized and intelligent plan of action. For a beginning runner, this may mean something like slowing down and working on consistency. For an intermediate runner, this may mean learning how to balance stress and recovery. For an advanced runner, this may mean learning the very specific modes of response that one's own body needs for training. This means "doing," sure. But it means doing in the right way, at the right time, in the right measure. Figuring all the rightness of this out requires time spent running, but it also requires the skill of critical reflection and response. Being able to pull this off means that the athlete will always have energy and motivation to train. The most motivated athlete is the improving athlete.

The analogy to broader areas of life is straightforward. How often are our impulses rash and inadequately conceived? How often does life feel like a relentless, will sapping, treadmill? All effort, little action? Sometimes in order to start in a genuine way, we have to stop. And think. And then go again, but this time better.

I am probably preaching to the choir here; this is a self-selected hardy philosophical crowd. But sometimes it's important to say things clearly, even if they are obvious. Philosophy--the care and development of a habit of thinking--is important. It is relevant. It is practical. That's obvious to anyone who has encountered the discipline. But unfortunately, for a variety of reasons, there are forces on the loose out there that seem intent on disparaging this activity, opposing it to doing, and consigning it to the realm of fuzzy-headed academics. Sometimes even we philosophers get in the habit of doing this.

So, yeah, let's say it loud and proud: philosophy is a practical discipline. 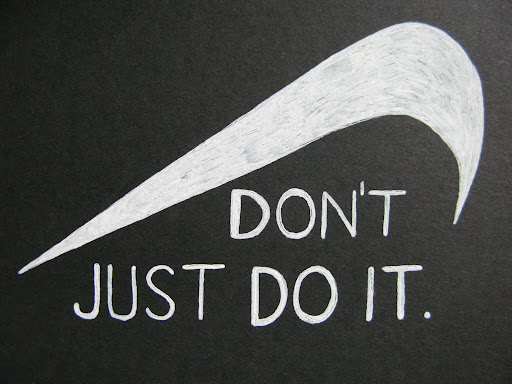 Forgetting the practical value of thinking lands us in a world where the only possible action is reduced to "just doing it," with little thought about what the hell that little "it" means or where it is leading us.

Working to prevent such a world seems to me to be just about the most practical thing we can do. It's a task that will take some thought.

So, yeah. Give a philosopher a hug.