By Jeff Edmonds - September 19, 2010
"That first feeling of something violent and resistless happening in the world at large, is accompanied by a hardly less primitive sense of something gently seething within me, a smouldering life which that alien energy blows upon me and causes to start into flame. If this be not the inmost texture of experience, I do not know what experience is."
--George Santayana, "Belief in Substance"

The American philosophers, folks like Emerson, James, Santayana, Dewey and their inheritors, took as one of their primary philosophical goals the articulation of the meaning of experience. They thought that much of modern philosophy thus far had been based on a false presumption, namely that there is a yawning metaphysical gap between the individual mind and the world that it perceives, and they thought that they could articulate a new way of doing philosophy based in and on a new way of viewing experience.

The false presumption of modern philosophy, like all false presumptions, has a lot going for it. We do seem to carry around this "I" that is with us wherever we go. Kant had a fancy name for it: the transcendental unity of apperception. The world comes to us, at almost all moments, as owned by a very particular person, by a very particular perspective. I do not see all the world, but only a very small and select part of it. My eyes at any one moment carve out a cone of vision, and what I do not see only exists in my imagination, which is a paltry thing indeed. The perceptive mind--these ethereal cones of vision supplemented by imagination--seems so unlike what we've come to know of as the world--that hard and raging and enormous and deadly whirl of solid objects, open spaces, gravity and fire, wolves and buffalo, water and wind--that to the modern mind they seemed to be made of absolutely different metaphysical substances. The mind one thing, the world something absolutely different and mysteriously irreconcilable.

The Americans took a different approach. They posited a world of pure experience, noting that the word can be taken in two senses. The first is the subjective sense, which tracks the qualities of mind. The second is the objective sense, which tracks the qualities of the world. The problem was not to reconcile these, to somehow figure out how one could be reduced to the other, but to look at the interaction between them. The problem of philosophy was how to make the interactions between our minds--those limited cones of vision and fantastic realms of imagination--and the world--that seething and powerful realm of objects, animals, weather, and others--better. This was their philosophical method, the method of pragmatism, which did not look to reduce one side of the equation to the other, but took the practical question of how to relate these sides, one to the other, more fully. The pragmatists didn't look for answers or for truth about which side of the equation was more fundamental. Their attitude was melioristic and fundamentally ethical, not metaphysical: they wanted to know how we could make better the lives that are forged out of interactions between self and world.

The key to this task was articulating a concept of experience that was essentially synthetic. Both self and world occur in experience. Experience includes both mind and body. Experience includes the feelings of pain, the rhythms of running, the calculations of effort as well as the long and winding road, your fellow competitors, hills, and the hot sun. The runner engaged in his task does not get caught up in metaphysical questions about whether his mind is more real than the pavement beneath his feet. The runner is attentive to all of the modes of experience, and as he moves down the road, the subjective and objective modes mingle and mix. The road itself takes on the qualities of the effort. It becomes long and hot. Hills become hard, measured in burning paces. A breeze takes on the qualities of freshness, winds become stiff. A primary reason that I value running is just this capacity that running has to integrate experience. 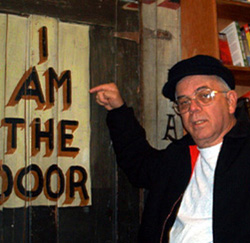 When we take up a skill with something approaching expertise, breaking the qualities of the task down into their subjective and objective aspects becomes increasingly artificial because we know these are always mixed. I suppose this is part of the reason that I resist so many of the new technologies that are meant to help us analyze our running. Analysis is important and intelligence depends on it. But equally important to intelligence is synthesis. Running logs, watches, garmins, and heart rate monitors teach us to break a run up into its component parts. But they do not teach us how to put it together.

Someone asked me the other day why I write this blog. What's the point? I suppose that it is an attempt to put things back together, at least momentarily. This, in the end, is the discipline of philosophy, the last synthetic mode of intelligence. Among all of the disciplines intent upon ripping the world apart in the search of nuggets of knowledge and information, mining it for gold, like the catacombed mountain of Potosi, philosophy stands alone in its synthetic quest.

The moderns thought that it was possible to unite world and mind, to reduce the one to the other with tricks of logic. They hoped for a total synthesis. For us postmoderns, that seems an impossible task. For us philosophy is a noble and tragic sort of thing, not a search for final and transcendent perceptions, but a temporal process of living. To take up philosophy is to give one's self a synthetic task among an over-analyzed life. It is to try to see life as a whole, to try to live it as a unity, amid and among all of its moving and sometimes divergent parts. This seems like a task worth trying, to me, even if the final destiny of both minds and body is to end up scattered and vacant, dispersed to the four winds, returned to the wild and seething violence of the world. Like the runs we embark upon daily, whatever insights we attain into life, are temporal, hard won, and doomed someday to disappear.

It takes courage to head out the door anyways, to confront the violent and resistless happening and to glimpse against that backdrop that primitive and febrile vitality that is me.
Experience George Santayana Kant Synthesis The Self