Dispatch from Paraguay #5: A Trip to the Interior 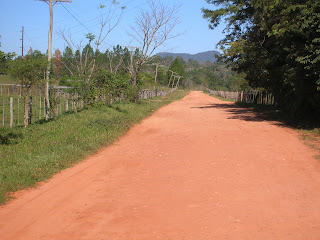 Some call Paraguay "An island surrounded by earth." If Asunción is the center of that island, the surrounding ocean is the Paraguayan rural countryside, a wide landscape of red dirt and small towns. The interior.

We got up at 5am last Friday, quickly made coffee, gathered our bags, and climbed into one of the nicer taxis I've seen in Paraguay (a late 80's Toyota Camry) and wound through the empty early morning streets of Asunción to the bus terminal to catch the first direct bus to Villarrica.

I'd been wanting to travel to Villarrica ever since I first came to Paraguay. I'm not sure exactly why. Perhaps it's because of the name of the town, or the fact that there are mountains, or the common saying that everything is backwards in Villarrica. So, we made it happen. The bus showed up on time and we piled in: Lulu, me, and her mother, Mirella.

For me, the most glorious Paraguayan experience is to ride the bus. The buses in Paraguay are cramped, generally in disrepair, herk and jerk along like a snail hyped up on cocaine, respect no bus stop (the "direct" bus to Villarrica stopped no less than 15 times to pick up and drop off random people from the side of the road), belch copious amounts of stinking diesel fuel, fill so full of people during peak travel times that all the air is displaced by hundreds of pounds of heavy human flesh, crash often, blare annoying music, obey no fixed schedule, follow routes that have no discernable rhyme or reason, run red lights, threaten pedestrians, clog streets, wake sleeping babies and generally toss their passengers--from young children to healthy young men to frail grandmothers--around the compartment like rag dolls. And woe to the passengers who get caught up in a random bus "rally"--where two buses start racing each other, literally flying side by side down a narrow and crowded street "a toda velocidad."

To climb on a bus in Paraguay is to give one's self over to the total relinquishment of control that is a characteristic of Paraguayan life, at least for the 99% who are not involved in the government. For we norteamericanos, we addicts of control, the bus is an antidote to our addiction. To ride the bus is to let go of that sense that experience is something to be mastered; it is to let one's self be mastered, to grasp however briefly among the noise, the fumes, the jostling, the crowd, the calls of vendors, and the steady movement of the street the slightest trace of pure experience.

So, we took one of these buses--a nice one, really--for three hours to Villarrica. We breakfasted on chipa and cocido, watching the rich green vegetation and bright copper dirt of the Paraguay countryside roll by out the window. Our bus left us in the terminal, which was almost as crowded as the buses that streamed in and out of it. We walked the four blocks or so to the Hotel Ybytyruzú (named for the nearby hills) and dropped our bags.

We had plans to eat lunch at the Hotel Tilynski, a small place run by second generation German-Paraguayans on the outside of the nearby Colonia Independencia, a German colony that is nestled in the hills we could see off in the distance. We had hoped to catch a bus, but were badly informed by the hotel that the bus would leave after lunch, so we hired a cab, who drove us the 20 miles or so to the hotel for 70,000 Gs--about 14 dollars. We showed up around noon, and advised the good folk of our presence. The lunch was pretty spectacular. It was two kinds of meat, beef plus a beef stuffed with sausage, accompanied by freshly baked bread, cabbage salad, pasta with a mushroom sauce, and a German-style omelette. All you could eat, and all of it cooked fresh just hours before. Afterwards, they served us cheesecake and mulberry pie and cups of rich strong coffee. We ate outside on the deck, enjoying the breeze and 70 degree sunshine--Paraguayan winter is rough! 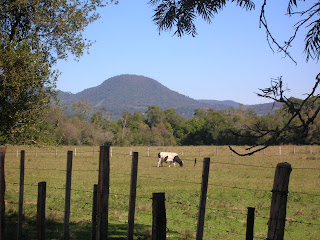 Some cows and the hills from the Hotel Tilynski, near Colonia Independencia

We decided afterwards to walk the 5 kilometers or so from the hotel to the town of Colonia Independencia. It was a beautiful walk, perfect weather, and tons of stuff to see and to photograph, from barefoot kids walking home from school to the huge free-roaming brahma bulls, to the cobblestone streets and red-dirt patios of the homes scattered along the way. We stopped on the outskirts of town to admire lemons the size of grapefruits outside one house, and the owner of the house, Aldo came out, showed us around his yard, and loaded us up with 5 different sorts of lemons picked straight from his tree, which Mirella would squeeze into lemonade when we got back to Asunción. We also found out that there is a waterfall about 5 miles outside of town, up in the hills. We didn't have time to make the trek, but hopefully someday we'll be back. 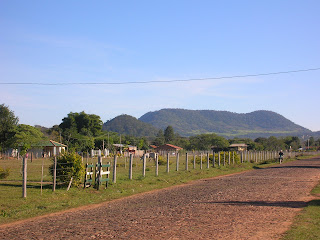 The road to Colonia Independencia.

After touring Colonia Independencia, we caught a bus back to Villarrica, took showers, and headed to the main cathedral to try to catch the 6 o'clock mass. We got there a little late, but found some seats toward the rear. The mass turned out to be pretty different from the ones I've seen in Asunción. Longer, with more time spent praying on your knees: literally 20 minutes or so on hard boards. And also more of the hymns were sung in Guaraní. After the mass, we located a pizza joint on the main square and ate a chilly dinner. A quick hot chocolate back at the hotel sent us to bed with warm bellies.

The next morning, we walked around Villarrica, pondered the endless stream of motorcycles, again usually weighed down with at least two people, but often three or four, and took in the other church--a neat stone structure built by the Franciscans. But the coolest thing was a park, in the middle of the town, where about five Capybara live. The Capybara is the world's largest rodent and it is native to this part of the world. They are super docile and would let us approach and take pictures. Here's a couple for you. 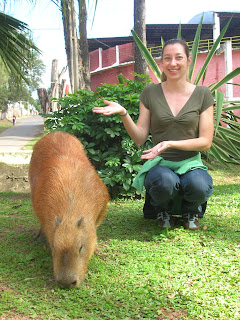 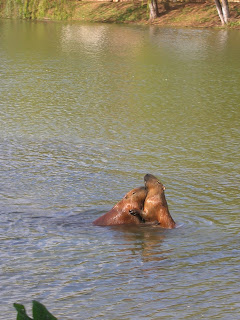 Our last week here has since begun--I imagine this will be the last dispatch. The time has literally flown since we've been down here, and our thoughts are now drifting back to that other life we have. School, responsibilities, English, our Nashville friends and family. I've been a little sick the last week and haven't been able to run as much as I'd like. And I've been eating a ton of delicious food. But I'm looking forward to jumping in some 5ks when I get back to the States. It's been a good trip--long enough to get really settled in--and it's sad to think we will be leaving soon. But so it goes: onwards!
Experience Racing The Self