By Jeff Edmonds - October 08, 2009
Is running logical? Well, it depends on what we mean by logical.

This conception of logic takes it to be something that operates independent of passion and emotion. Logic uses universal and objective reasons, which are ordered under the laws of thought and do not allow for absurd conclusions or the possibility of contradiction. On this conception of logic, to write on "the logic of long distance" means spelling out in reasons that are universally available, clear, and well ordered, an account of why it is that long-distance runners do what they do.

If you've been following this blog with the hope of finding such an account, it is likely that you have been disappointed. This is because I am alluding to a different, older conception of logic. "Logic" for the Greeks meant, simply, speech. For the Greeks, to use logic meant to make an attempt to articulate. Its deeper roots mean something like to gather and to collect.

The logic of long distance, then, is an attempt to gather together some of the attributes, challenges, obstacles, qualities, and characteristics of the encounters we make with long distance in order to articulate them in speech. These attributes and the way they hang together in language constitute the logic of long distance. On this way of understanding logic, every activity and every thing in the world has its own peculiar logic: its way that it presents itself to speech, the way it allows itself to be articulated before a community of listeners.

To think logically, on this way of understanding logic, means to enter into the peculiar logic of a particular perspective and to attempt to share that perspective in a way that invites others in. Too often we take logic to mean exactly the opposite of this: to think logically is to attempt to explain why the logic of a a single point of view necessarily trumps all other points of view. I find it interesting that to use logic now means to attempt to persuade or to convince someone with speech. We use terms like logic and reason as epithets to police the border between sane and intelligible speech and the sort of speech that is crazy or unintelligible. This is an old habit, built up over long years of authoritarian and fascist religious and political propaganda. 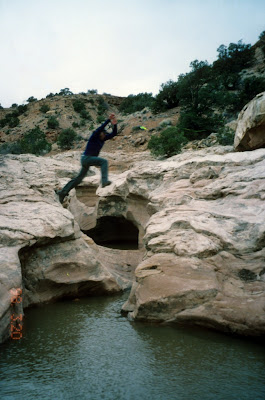 Logic is a leap, yo!

From my perspective this old habit is illogical: it does not invite us to gather and share our own logics, but instead attempts to shut down the varieties of logics of life in the name of a single Logic. If you do not see things from my point of view, then you must be illogical or irrational. And of course from the point of view of the non-runner--and even from the point of view of the runner--the logic of long distance is often illogical: like the rest of life, it often resists articulation in speech.

So, is running logical? Not entirely. It cannot be captured in speech, entirely. But, it makes sense to me in particular ways that I can begin to articulate. Through running I understand things that a stricter form of logic wouldn't allow me to understand. I am both a reptile and a philosophy professor, for example. Or, there is a place where pain and pleasure meet. There exist times in human experience in which putting forth the hugest of efforts demands not trying at all. There exist processes whose meaning can't be reduced to their ends. Intelligence sometimes means thinking less. Feelings can be more precise than concepts. The highest form of discipline is fed by joy and pleasure, not sacrifice and pain.

Such is the logic of long distance. William James puts it like this: "Sustaining, persevering, striving, paying with effort as we go, hanging on, and finally achieving our intention -- this is action, this is effectuation... Here is creation in its first intention, here is causality at work." The logic of long distance is not cold and hard. It doesn't tend toward unity or clear explanation. It's loaded with passion, emotion, effort, failure, fortune, chance, risk, and hope. It's a logic that plunges down into life. It is all partialities and unfinished business.

That other logic, the pure, rational, and complete one, is funded by the attempt to escape from these things into another realm entirely. The realm of pure reason is one in which we all share the same perspective, and we are all in control of our speech. In that world, we know what life is, we know the difference between right and wrong, good and bad, true and false. There's no need for experimentation because it's all been worked out in advance according to the rules of reason.

The discipline of long distance, the logic of running, demands resisting the pull of the realm of pure reason. It means escaping the awful and oppressive clarity and finishedness of that world by plunging into the vagaries and open windows of life. Our logic is one of experimentation, not deduction. Runs are not arguments. They are encounters with the limits of our bodies, with friends, with the concrete sensations of lived experience. It's this leap into life, not the principle of non-contradiction, that governs the logic of running. That's logic enough, reason enough, for me.