Okay, a brief race report. The facts are straightforward. I went out at a pace just under 6:00 and held that until mile 13 (half split was 1:17:xx), mile 14 I had begun to slow, dropping to 6:15 pace--a difference that seems perhaps slight, but with 11 more miles to go, it was a harbinger of the coming death march. I dropped out of the race at mile 15, taking my 3rd lifetime DNF. 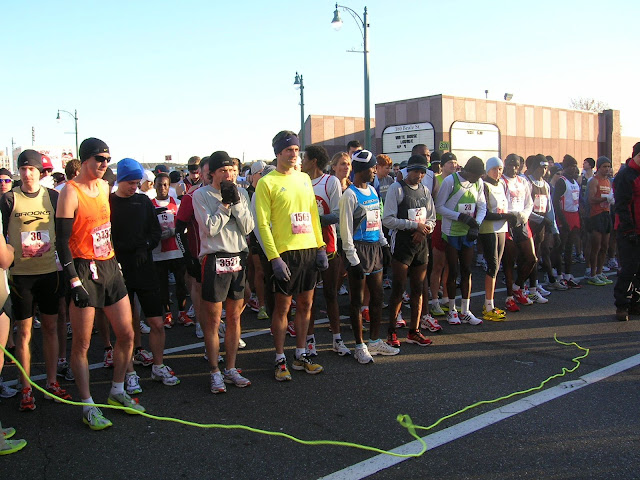 The best part of my race.
It was a gamble going in, as the cold that I've been fighting over the last three weeks continues to linger. I was hoping that it wouldn't affect my performance too much (I'd already ratcheted my goal back from low 2:30's to "anything better than 2:38:06"), but it did. A sick body will refuse to go to the well, and that's what mine did.

Another contributing factor was the lack of company in the race. I ran the first half of the race with two half-marathoners, which was helpful until they started kicking it in, dropping me somewhere around mile 11. It never feels good to be dropped, even if the folks you are running with are in a different race. After they split off the course at mile 12, I was totally alone: no one in sight, for the half-mile ahead or behind me. It's a fact about our sport: as individualistic as running often seems, we run best in groups, working together. So, at the very moment that the race gets most difficult, I was running alone.

A silver lining: I'm not sore today--the day after. This indicates to me that my legs were ready and that the sickness was indeed the problem.

What to do from here? Get healthy, first--then...
Marathon Racing The Body