By Jeff Edmonds - October 24, 2010
The usual race report begins at the beginning of the race, and it tells the race in chronological order. But anyone who has raced hard and raced well knows that a race does not unfold chronologically. The beginning of the race happened long before the gun. But it also happened at mile 21. And it began again at somewhere between mile 24 and 25. Or did it begin long ago, with that very first race, or that first 6 minute mile, the first time I dreamed of being fast, faster, the fastest?

The beginning of the race is multiple, really. Each race has many beginnings.

The beginning at mile 25.2. There was a clock there with a mile to go, and it read 2:30:00, as I passed it. Anyone who has been reading this blog with consistency knows that this is a number with great weight for me. All runners have their totemic numbers. This is one. Another is 6, as in 6 minutes, the pace I had been struggling to hold since mile 20. At mile 25.2, I raced to run the last mile under 6 minutes. This would keep alive on of the primary goals of this race, which was to run the full marathon distance at a clip under 6:00, a dream I can distinctly remember dreaming over 15 years ago, on a fall run down one of my childhood running routes. I know exactly where I was, and how I was feeling when this idea occurred to me as a possibility. I ran 5:54 for that last mile, that clear fall day 15 years past swirling in front of me, leading me on.

The beginning at mile 4. I came through the fourth mile in 23:59. Too slow, really. I was running with a group there, and there was no one in front of me--the next group up being the sub 2:30 group, a pace I will run some day, but which I did not plan to take on that day. So, I struck out on my own, as every marathoner is loathe to do, but has to do at some point. I had to run my race. Miles 4 through 13, I just clipped along in the low 5:50s, no one to see in front of me, not looking back. This was probably my favorite moment in the race, feeling strong and just running. There is something about marathon pace in those early miles that really speaks to the runner's soul. After all the months of holding back in training, we get to show off a little, run strong, finally, almost recklessly, but still easily.

The beginning, just before the beginning. I arrived at the starting line around 30 minutes before the race, and the very first person I saw was one of my very best friends from college, Dan. I hadn't seen Dan since my wedding, almost seven years ago. I knew he was running, taking his shot at sub2:30 (he nailed it, with a 6 minute PR, running 2:28!) We jogged around together, just like we had over a decade ago as college teammates, chattering, anticipating, happy to race. At the start, I met up with Andrew and Mikey, two more training partners, and the four of us stood together, ready for the run. Due to a speaker malfunction, the national anthem couldn't be played, so the runners together, spontaneously sang it. Which is the way the anthem ought to be sung, always. The gun fired, and away...

The beginning at mile 3. My wife was crewing for me--she was strategically located at the Rourke Bridge with Gatorade and Gu. I'd told her to position herself past the crowd so I could be sure to see her. As I came through 3, I started looking--where--where--where, the crowd thinned to nothing. Then -- there! Jumping and waving: ¡Fuerza! Relajate... The crowds for this race were great, knowledgeable and passionate, but seeing someone that is there just for you is so huge. I relaxed and ran on. The early group (Tim, the guy behind me, would roll with me later)
The beginning at mile 13. After flying solo for 7 miles, a young runner named Tim came up on my shoulder and gave me a huge grin: "Let's go get 'em." A couple of runners from the front pack were beginning to falter, and we ran together, hunting them down. This was a huge help to me, as I could relax and let Tim set the pace. We were both feeling good, and these were my fastest miles, some of them in the high 5:40s, most in the low 5:50s. We rolled together like we'd known each other our whole lives, and in one sense we did. At that point in the race, there really is nothing more to you than a runner. Everything drops away entirely: it's just a steady and strong rhythm, footfalls and breathing. It's impersonal and intimate, simultaneously, something human beings have done for millenia, running together. We rolled.

The beginning at 5am. I was up before my alarm, and I hopped out of bed. I was eager to race, to put my body to the test: it was going to be a special day. I ate a few things, drank coffee and Gatorade, took a shower. I wasn't nervous; the anxiety of the previous week just faded away to the clarity of race morning. Nothing to do now, but run.

The beginning at mile 23. My pace was slipping. For two and a half miles, the easy and strong gait, the runner's gait, had become a struggle. I'd gone from holding back to running strong, to the end of the race: the fight to maintain. At mile 20, the race was no longer run in large chunks, but now would be pieced out in horizons, mile markers, minutes, seconds. I was hurting. For the last three miles, I'd had the thought that I would see my wife at mile 23, and I just ran to her, not thinking of the three miles beyond that. As I ran through the crowd at the bridge, people kept telling me I looked strong, but I knew it was a noble lie. I was hurting. Mile 22 had been the slowest of the race, a 6:10. I saw her, and she gave me water and the last Gu. I drank, cool liquid. Ate, sweet and sticky, drank a bit more, and ran ahead, away from her, away from the crowd. The last miles of a marathon are always run alone. This was the hardest beginning. 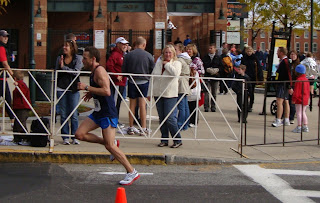 The beginning at the end. The end is always surprising because by that point, if you've run the race right, you've committed yourself to endless suffering. So, when I entered the stadium, I had to convince myself with what was left of my dying brain that this truly was the end. Kick you bastard. And I did, awkwardly, and the legs responded out of long habit and almost against my will at the sight of the finish clock whirling into view: 2:35:54. Mylar, a medal, staggering. Out in the field was Dan, grinning. I grinned too. 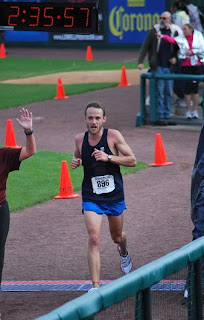 (Yes, I really did finish.)
Racing