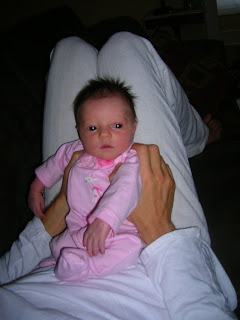 First off, apologies for the delay in posting. I have a good excuse, maybe the best excuse, as my daughter was born a little over two weeks ago. Since then I've been too caught up in life to reflect on it. I have been able to get out for a few runs, and man is it nice.

One of my philosophical friends who is a mother herself, sent me this John Dewey quote when she heard of our good news, which I thought was nice:

"A baby in the family is equal with others, not because of some antecedent and structural quality which is the same as that of others, but in so far as his needs for care and development are attended to without being sacrificed to the superior strength, possessions and matured abilities of others. Equality does not signify that kind of mathematical or physical equivalence in virtue of which any one element may be substituted for another. It denotes effective regard for whatever is distinctive and unique in each, irrespective of physical and psychological inequalities. It is not a natural possession but is a fruit of the community when its action is directed by its character as a community." - Dewey, The Public and Its Problems

For those not attuned to the philosophical code words, Dewey is taking on Kant in this paragraph, saying that what makes us equal is not some pre-existing, rationally deducted, and a-priori transcendental quality that is the same across all humans.  Equality is not founded in mathematical equivalence or in the higher reason of philosophers. It is instead an effect of human action; it is constructed by communities and individuals in effort together, and it is found wherever care is demonstrated. Dewey prefers to see equality as a fruit of labor rather than as a transcendent principle. It's the name that we give for care and concern.

That's the pragmatist take. I suppose the reply from Kantians and a-priorists would run something like this: "Sure equality requires care and effort from communities and is certainly a fruit of human action, but arguments are needed for providing that care, and the attempt to ground care and concern in shared human qualities provides the basis for argument. The value of equality needs arguments to support it and cannot be taken for granted or shown by an appeal to parochial experience." In other words, what philosophers ought to do is give arguments for why we should treat people with care and concern, and the best argument for that is our shared and universal human project and characteristics.

But to my mind, this is just as question-begging as the pragmatist take. It assumes that we need arguments for treating each other well and equally -- which assumes from the outset that equality is something desirable and worthy of being defended. How do we arrive at that idea? Probably through the experience of having been treated with care and concern.  To my mind it's that treatment--not an abstract argument--that leads us to even have the idea of a shared and universal human project. We don't come to this idea deductively, but inductively, on the basis of many disparate experiences of equality. Our best political and social ideas don't come prior to experience but are instead grounded in actual experiences of good will and regard. Capitalizing "Equality" and naming it as a right and locating it "prior to" experience is a way of honoring Equality, but such honorifics also devalue the hard work of making small-e experiences of equality.

I'm on the front lines of human care and concern right now, and I have the bags under my eyes to prove it! I can tell you that I am gaining daily a more intimate knowledge of the true effort that care and concern takes. I also am struck with a profound appreciation for the care and concern that has been shown to me by my parents, by friends and family, and by colleagues. It's these experiences that animate -- and re-animate again and again -- our moral and ethical life. The arguments of philosophers are pale shadows too far removed.

As for the blog going forward -- please don't worry. I haven't given up on it and hope to get back soon into the more or less weekly posting rhythm that is always my goal. Merleau-Ponty reminds us that philosophers are perpetual beginners, and I am excited to begin again.

As runners, too, we are always beginning again, and I wish you all the best as we head into that resolutionary season where we re-evaluate our goals and training and set out once more to become the runners-that-we-might-be.