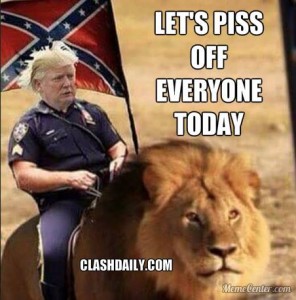 It's fashionable to say we are post-truth, but falsity and unreason have always lived alongside fact and inquiry -- and not just as their opposites.

As folks like Nietzsche and Freud have shown, the capacity for truth and reason is often built out of processes of violence, rejection, and resentment. Anyone who has been to school understands this tension. So must anyone who has reckoned with the history of America, beacon both of slavery and of freedom, of both equality and of racism, that most arbitrary and ugly form of inequality.

We are, after all, not minds, but animals. Human animals operate largely outside of processes reason or even self-interest. These are late-arriving achievements, hard won and fragile.

Yes, we can maintain ourselves in a space of reason; we are capable of operating purely economically, but anyone who has interacted with another human animal intimately knows that all of us also need spaces of irreason and even violence, where we can express our fear, our feelings, our physiological animality. These spaces give us the strength to recover so that we can continue to do the work of enlightened living together.

The fragile institutions of democratic life are built to accentuate our capacity for reason, but as the events of this new century unfold, from 9/11 to Sandy Hook, from Trump to Allepo, it's clear that they are not always strong enough. Irreason and violence can be more powerful; they are likely more native to our natures.

This raises a question: What should our expectations for democracy be? How civilized can we expect to be?  In the push for a more perfect union, have we set up unreasonable expectations for our animal selves?

There is no greater recipe for discord in relationship than to expect your partner in that relationship to be more reasonable than they are -- whether this is your spouse or your 4 year old. How often have we imposed a tyranny of the rational only because we were incapable of empathy, of listening, or of just being with each other without judgment.

One way to understand 2016 is that this is the year that the tyrant within the liberal/moral/democratic/pragmatic social order [the superego] has been knocked off his throne.

How should we who -- despite and because of our privilege and blindness -- sustain the power of enlightenment culture respond? What do we owe to our animality? What can we expect from it? Can we tolerate its re-emergence?
Animality Democracy Michel Foucault Nietzsche Reason Trump