By Jeff Edmonds - August 30, 2014
Andy Anderson has been kind enough to share his account of breaking the Mt. Whitney FKT (Fastest Known Time.) Andy is also the owner of the Long's Peak FKT and the Grand Teton FKT (see those links for his accounts of those records.) Nice work, Andy! The words below are his:

“Those look like old man shoes,” joked my friend Ann as she printed out my day permit for Mt. Whitney.

“12 more minutes to go” sang Johnny. Down, down, down. I made it across the main trail and over to the old trail. “Two more minutes to go.” Go, go, go. Making tire screeching noises around the switchbacks (playing cars with my four year old has reminded me just how much fun sound effects are), I hit the three hour mark with a little more than a quarter mile to go. One lap to go. A quarter mile takes fast runners only about a minute on the track. My last quarter mile took a little under three minutes even with the sound effects. I rolled into parking lot and stopped my watch: 3:03:05. Not under three hours, but it is a new record. I jogged around a little, changed clothes, and drove back down the hill to have lunch with my ranger friend. She treated me to a burrito at the local taco truck, then I headed back home to my family in Truckee listening to Meb.
Splits:
Trailhead: 0:00:00
Lower Boy Scout: 31:00
Iceberg Lake: 1:13:20
Summit: 1:49:10
Iceberg Lake: 2:10:43
Lower Boy Scout Lake:  2:40:14
Trailhead 3:03:05
Gear:
Food:
Link to my run on Movescount: http://www.movescount.com/moves/move39367473
Link to a shaky video of me screeing down a slope in the Dolomites several years ago with my sound effects: http://youtu.be/UaVjxlKJIGE
photo of me and the post run burrito taken by Ann Piersall: 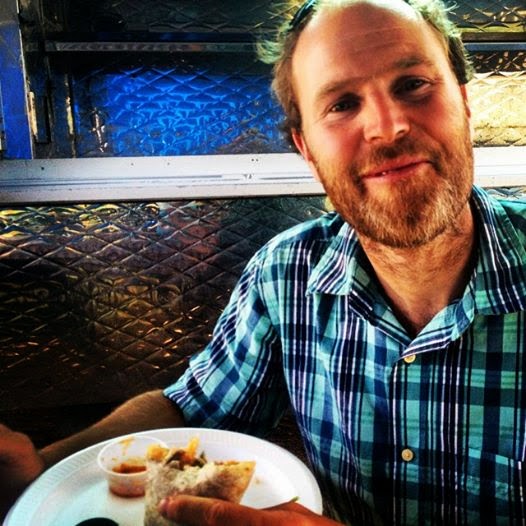